What a journey this has been!  Last summer was spent creating our script, and preparing for the show.  In early November, we held our auditions with our group.  Riverfront never holds open auditions – we register students and audition from our established group. The fall was spent sandwiching in rehearsals around Pride and Prejudice. Bit by bit, it was coming together. But of course, the real flurry started once the curtains closed on Pride and Prejudice. Then our costume team immediately started into Aladdin with scarcely a breathe. Music and choreography moved into high gear, and the Juniors flooded back into our rehearsals.
And then, on or about May 4th, when I got the first picture – set construction began. Kerri Jubenville had planned out this set over the summer, and it looked big – it looked ambitious – it looked EXPENSIVE. Knowing that our costume and set budget was bigger this year, we had been working hard on fundraising – and we’re still at it, quietly and behind the scenes, if anyone is interested in sponsorship!! But I’m proud to report that Kerri came in slightly under budget, and that she and Jennalyn have almost singlehandedly constructed this set in less than three weeks. There are some finishing touches going on at the theatre.
There’s been help!  Some of the kids have helped with the canvass, and the painting, and Jennalyn’s brother, Tim, got roped in at least once to construct and paint – and made a few food deliveries, as well – home-made pizza, unasked and unexpected, on one occasion!
Kerri and Jennalyn have very nearly literally moved in here, though, and somehow, RTC HQ” – which is, after all, just a normal raised ranch with a two-car garage that NEVER gets a vehicle parked in and probably never will – was home base to all this set construction. 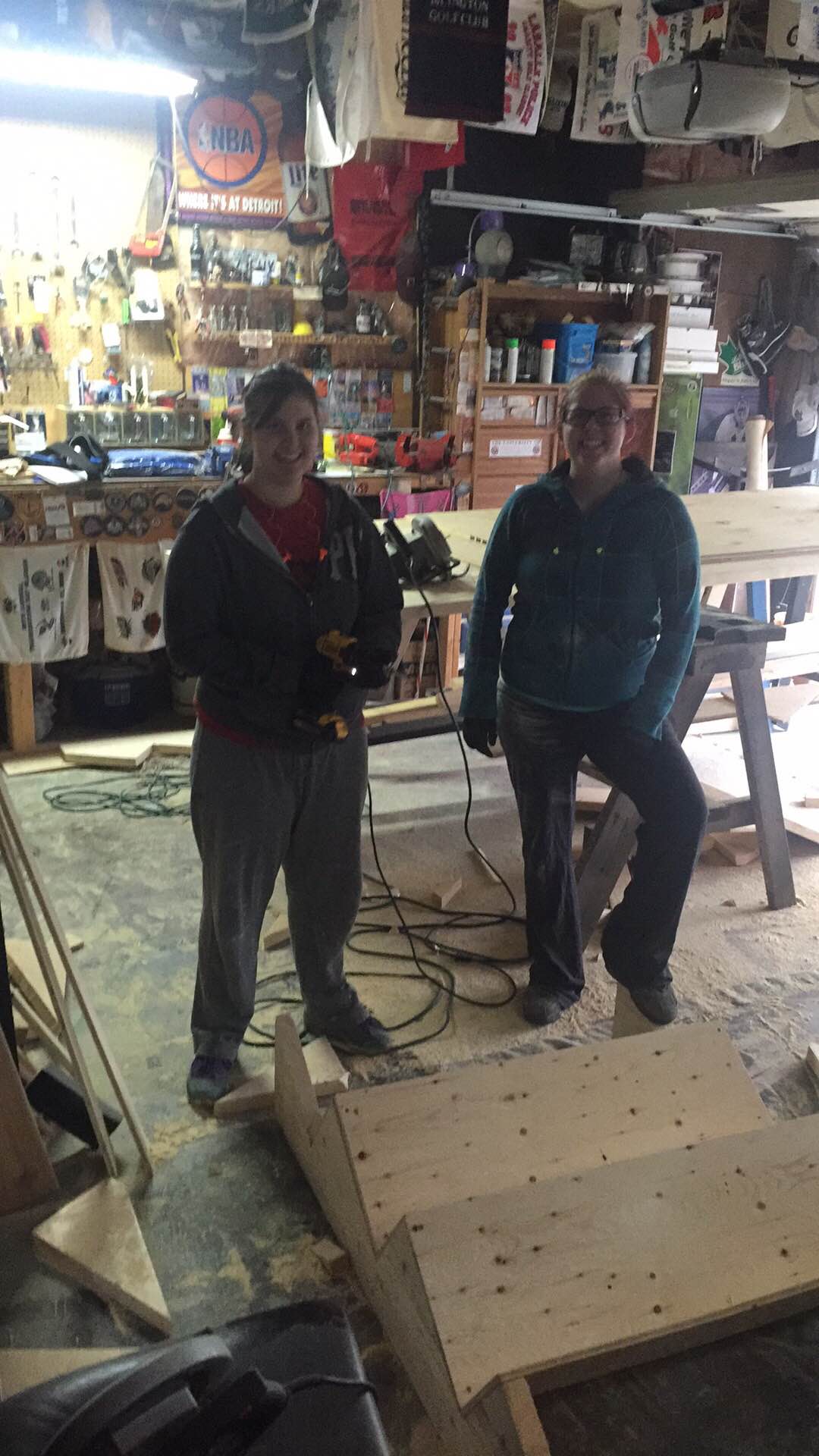 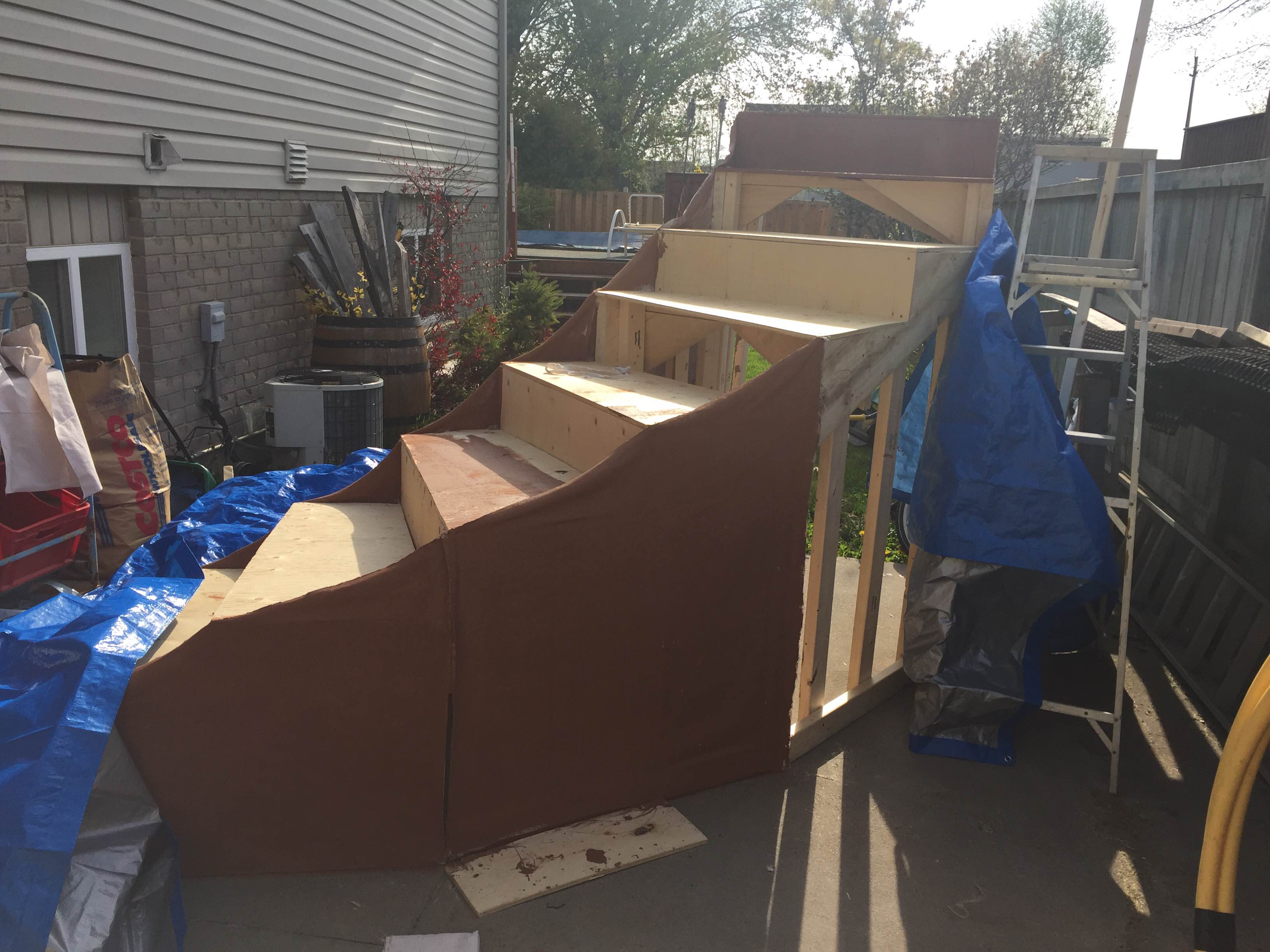 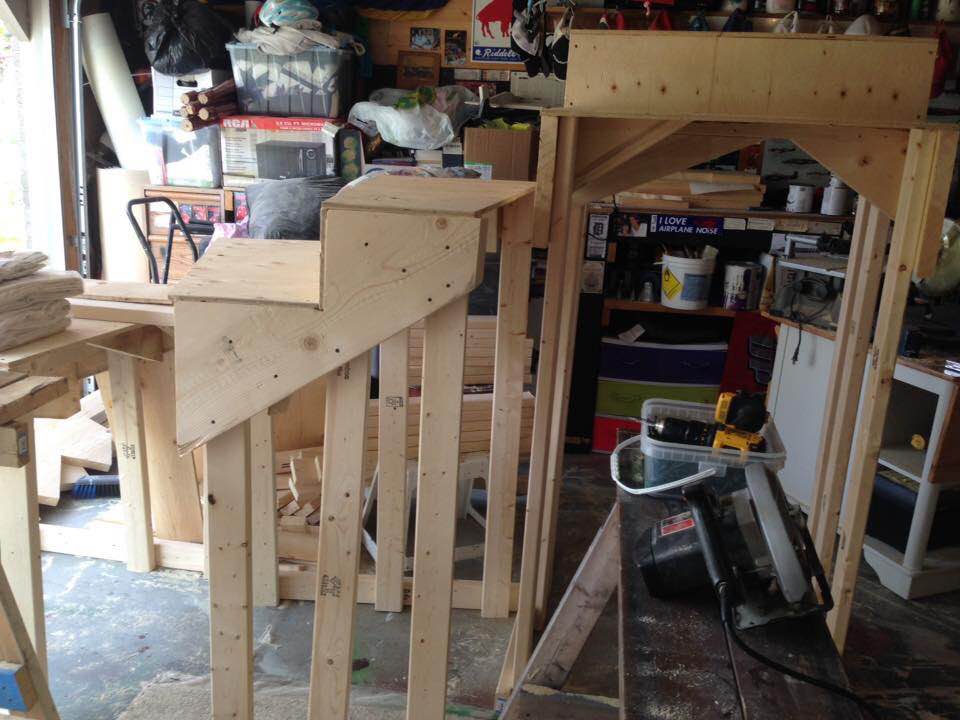 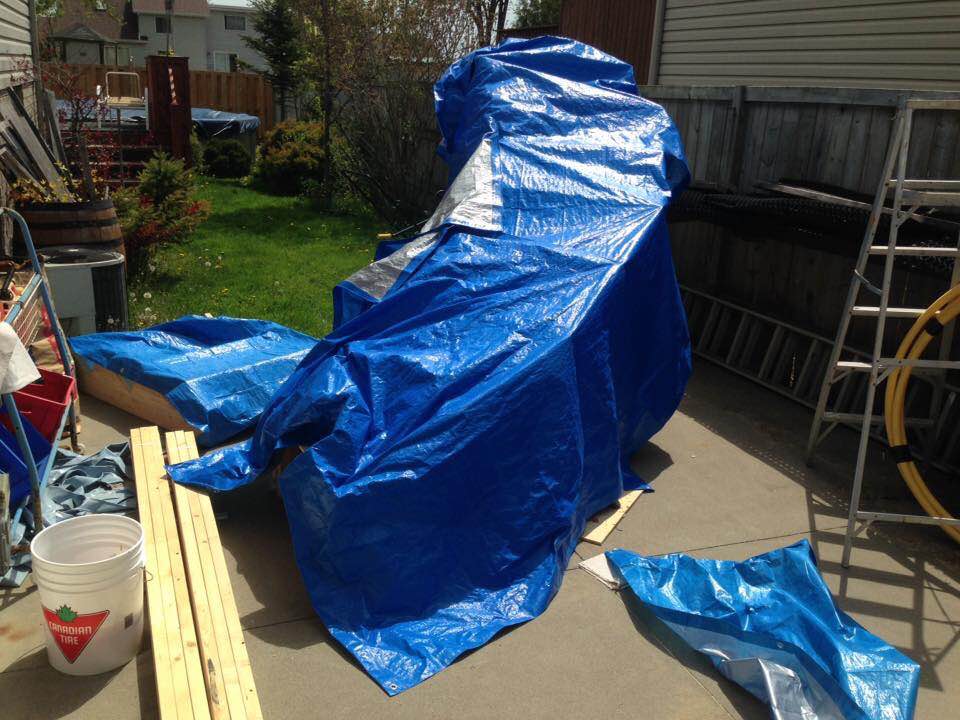 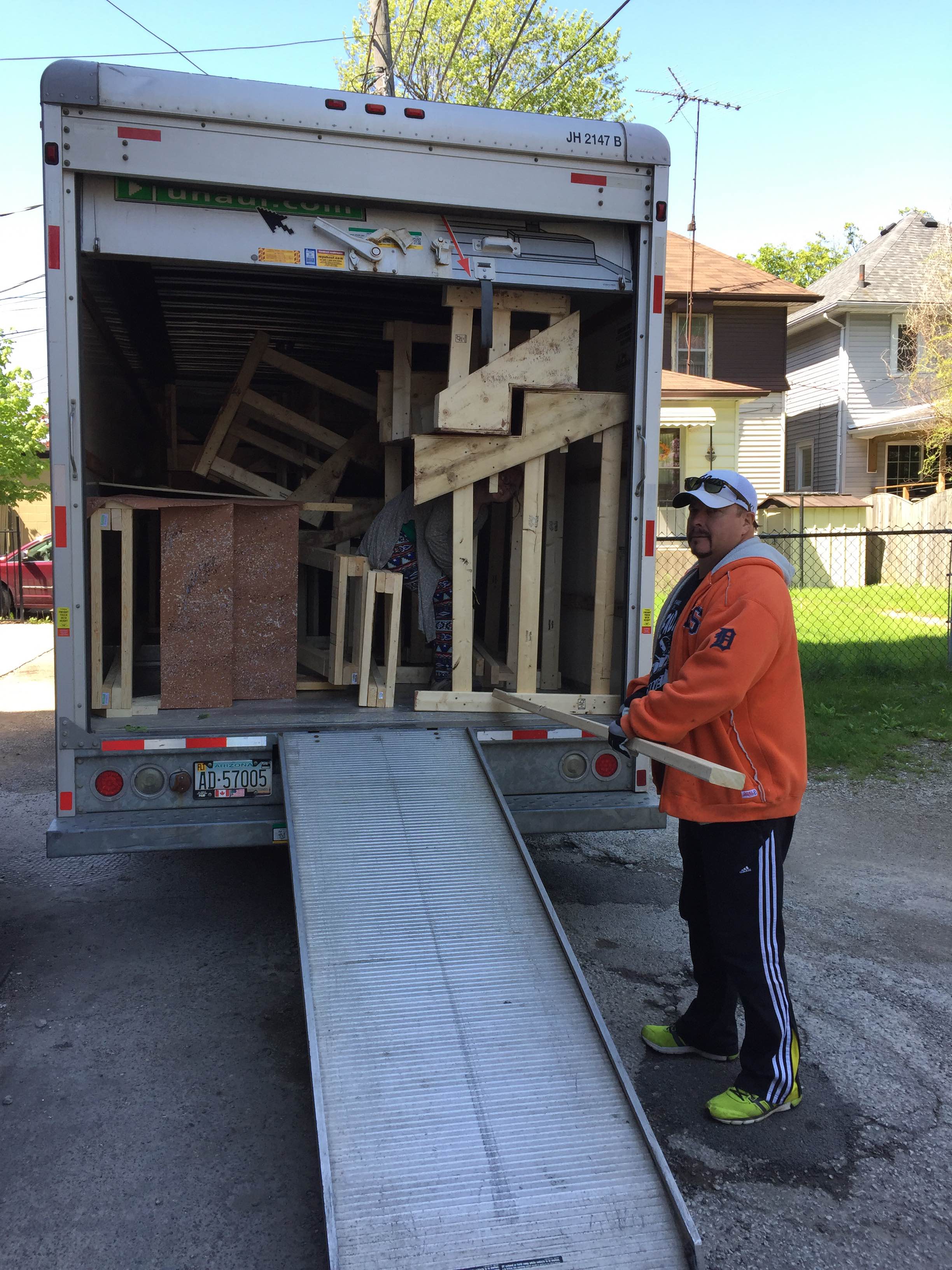 When we got it all into the 26′ U-Haul truck, I honestly couldn’t believe that they had managed to construct and store all of it at my house. Not to mention the inclement weather that they had to deal with on occasion that forced them, and nearly all the set, back into the garage under cover! 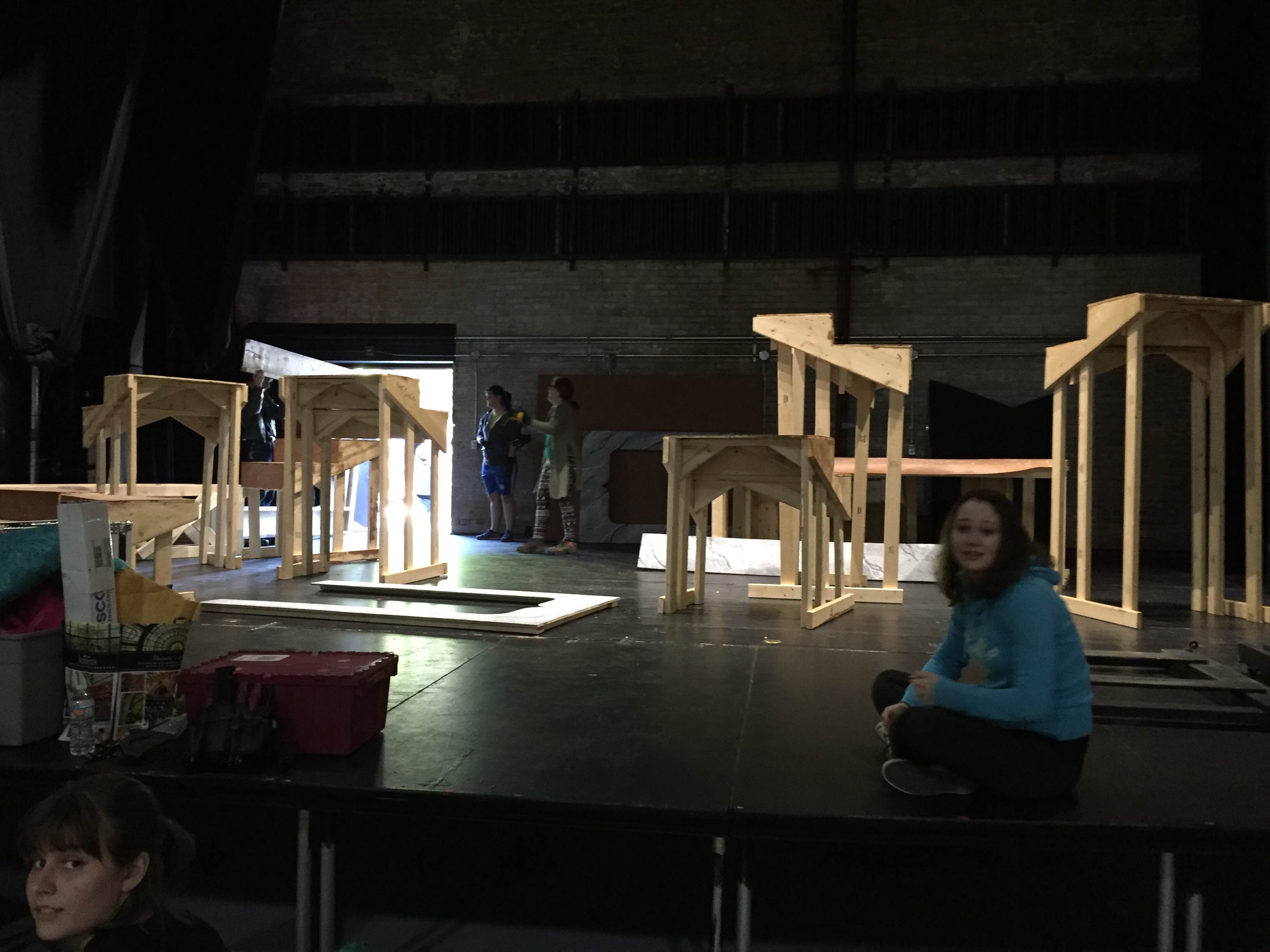 Look at this monster!  I don’t think it was even entirely all in the door and onto the stage at this point!

Tricky tech and construction negotiations going on here – so much to assemble, so many lights to adjust and set!

While most of the crew is discussing their plans on stage, some of them have discovered the props. Does anything make an actor happier than playing with swords?  I’m not sure…

Pieces of the stairs being put together to move into position. 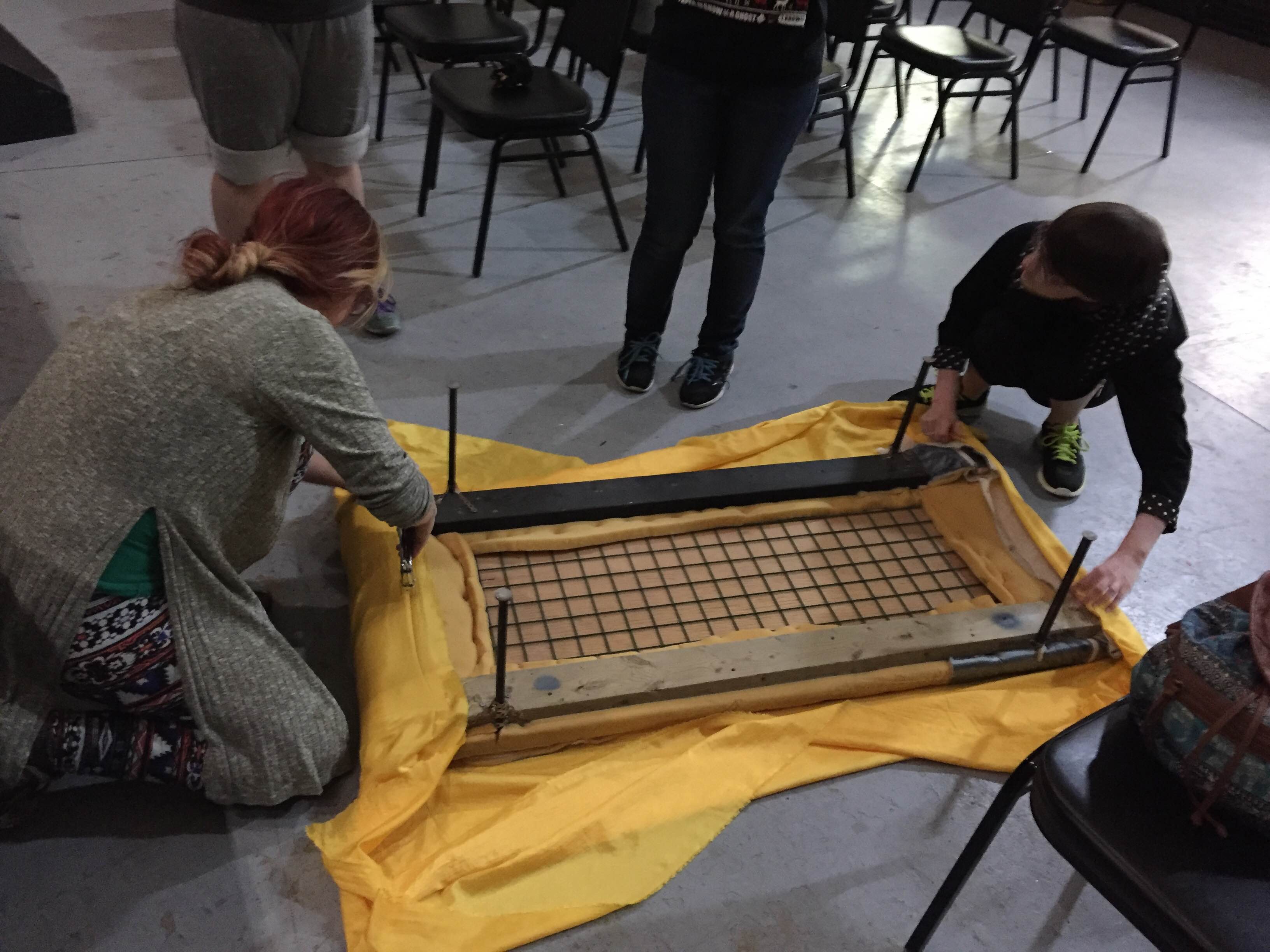 The bench/bed being repurposed for the Sultan and Scheherazade’s platform. This piece of furniture has a long history with RTC – its most stellar moment being an onstage malfunction during Peter Pan which will go down in history as one of our funniest moments.  But we definitely don’t want a repeat this show! 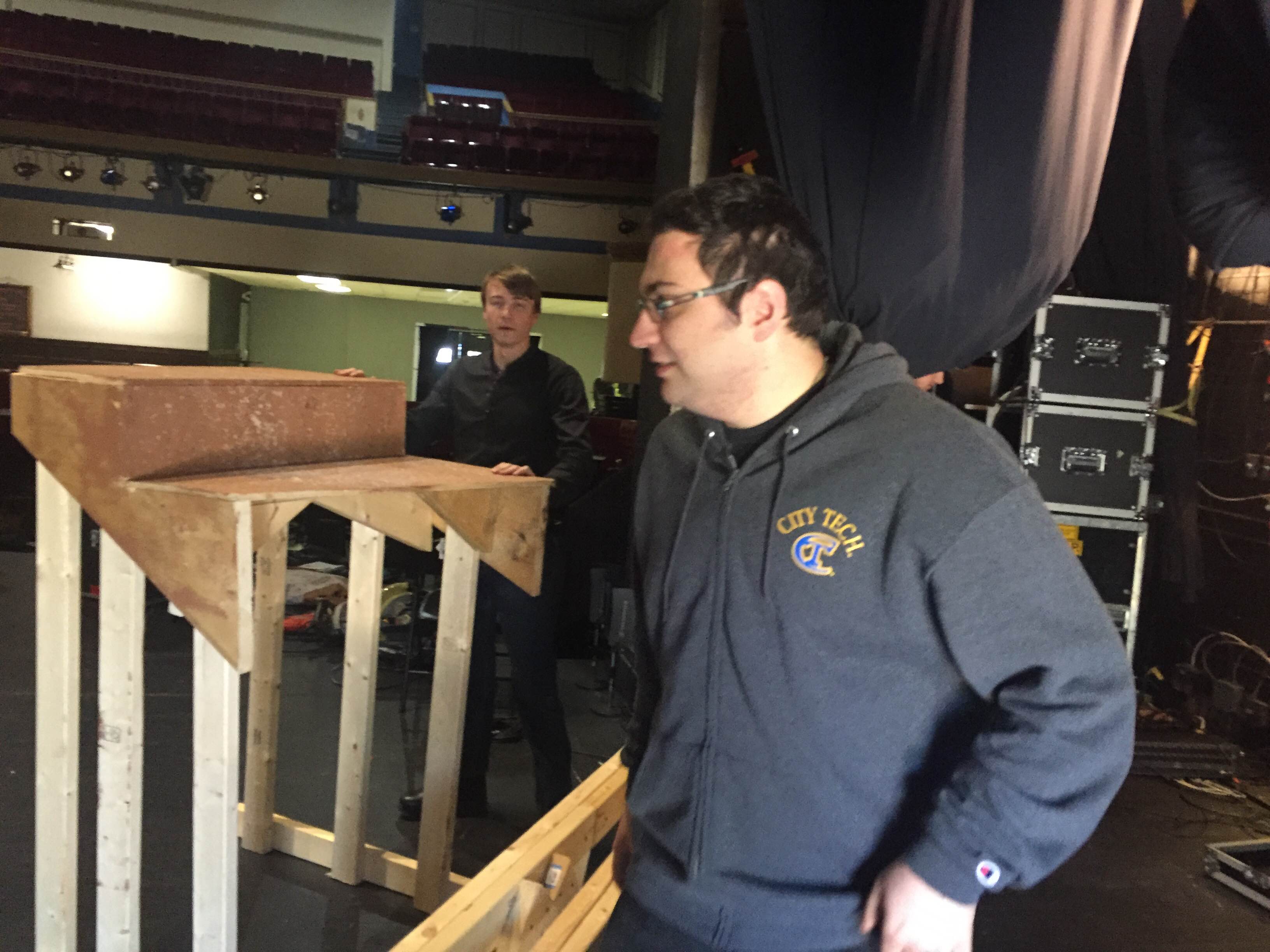 Sabin Visan, exhausted after a midnight shift, but there he was all day, starting work on his lights and getting a plan together with the rest of the crew! 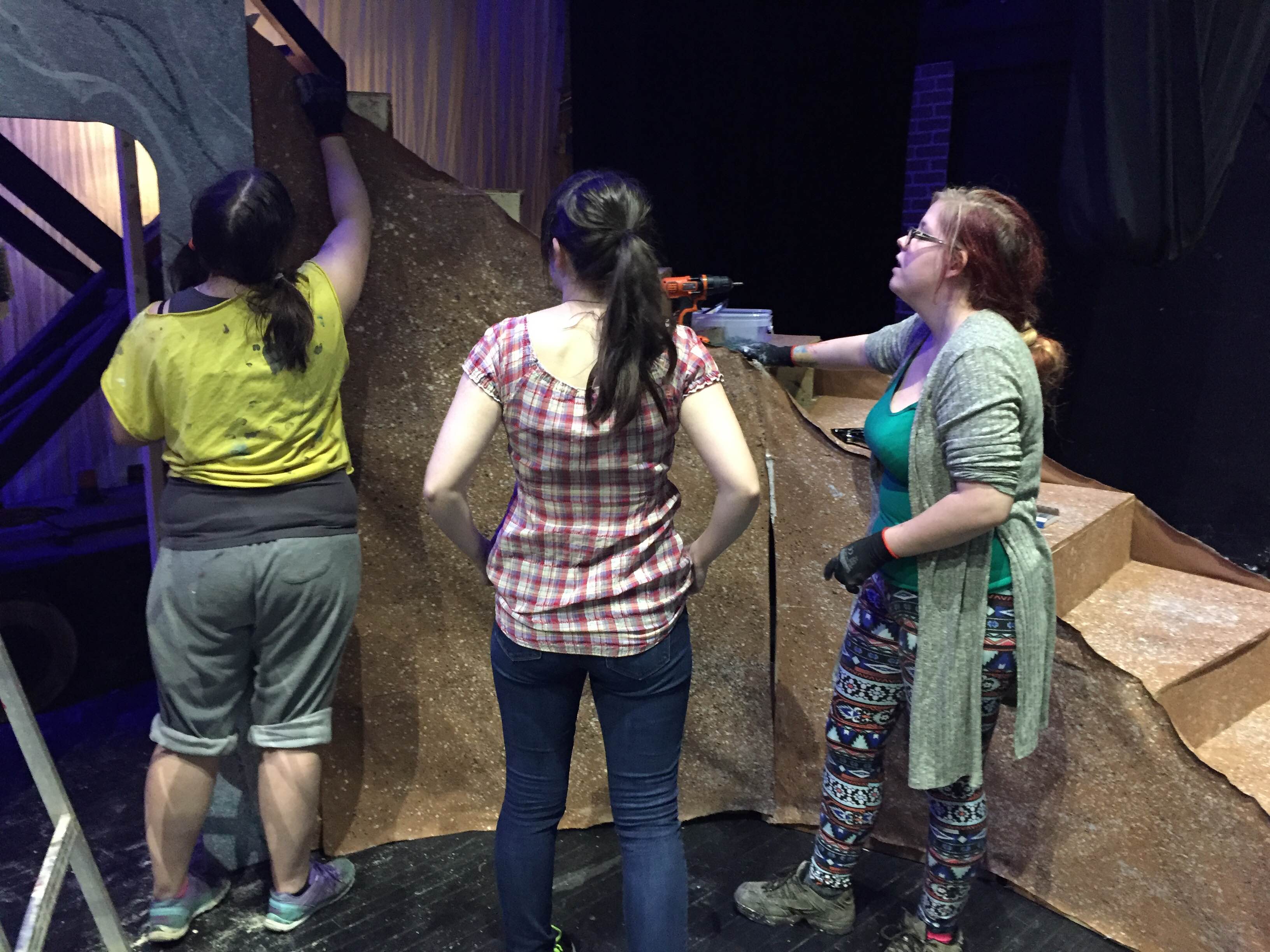 With the stairs assembled, the stretching of the canvas, already painted, into place, began. 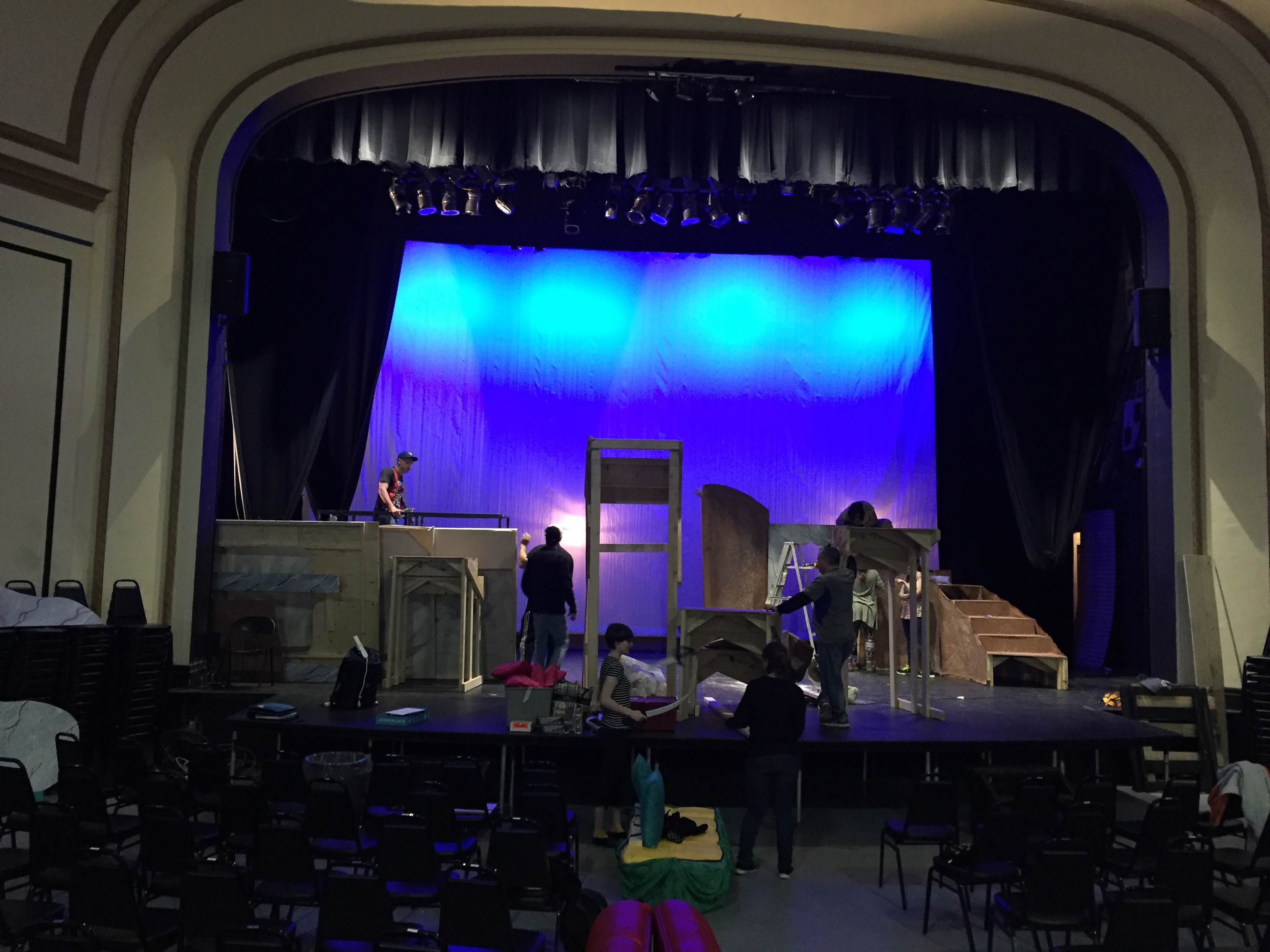 Without a doubt, the most intense part of this entire operation was getting the platform into place. Thank God for many hands and the lift!

Preparing to support the platform as it’s moving into place.

The back flats starting to go in. The set wasn’t quite finished last night, but we got most of the way there! The kids get on stage tomorrow, so we know what we’re doing until then!

I’m not sure I’ll share another photo of our set before we open, but it’s well on its way now!  Look how BIG it is, and it looks stunning under the lights, with the cyc (white background curtain) out.  We have our special equipment in for some of our magical effects. There’s a “flying” carpet underway today, and this show is going to be SPECTACULARLY beautiful.  And this is even WITHOUT DISCUSSING our beautiful and talented cast in their gorgeous costumes!
Friday, May 20th at 7 p.m.
Saturday, May 21st at 7 p.m.
Sunday, May 22nd at 2 p.m.
Friday, May 27th at 7 p.m.
Saturday, May 28th at 7 p.m.
Sunday, May 29th at 2 p.m.
Make sure you find one of those dates and get to The Olde Walkerville Theatre to see this musical.  Bring a friend!  Bring a friend’s child – this show is gorgeous. 17 musical numbers, a wonderful, heartwarming, exciting, funny script – this is one for the books!