On Friday, May 29th, 47 of us piled into 11 different vehicles and headed up to Stratford, Ontario, for RTC’s first out-of-town field trip.  The plan?  To see Hamlet, the Stratford Festival’s headline play this year. For this field trip, we had planned extensively!  It started with putting on Outrageous Fortune in February, and seeing how much the kids were getting into the story, and enjoying memorising the Shakespeare lines.  I got an email from Stratford, and looked to see which of the plays dealt with in Outrageous Fortune would be on the list this year for the festival, and there was Hamlet. The suggestion for a field trip got immediate enthusiasm, and we booked a block of seats, and asked for a “talkback” with the cast after the show. Once Outrageous Fortune was over, we started studying Hamlet in more depth each week.  We worked hard to be ready – you may have seen one of our posts about making the lapbooks, for instance! May 29th was the culmination of all that work, and it was a terrific day. We drove up together, leaving at 8 am, and meeting by the river Avon for a picnic lunch. 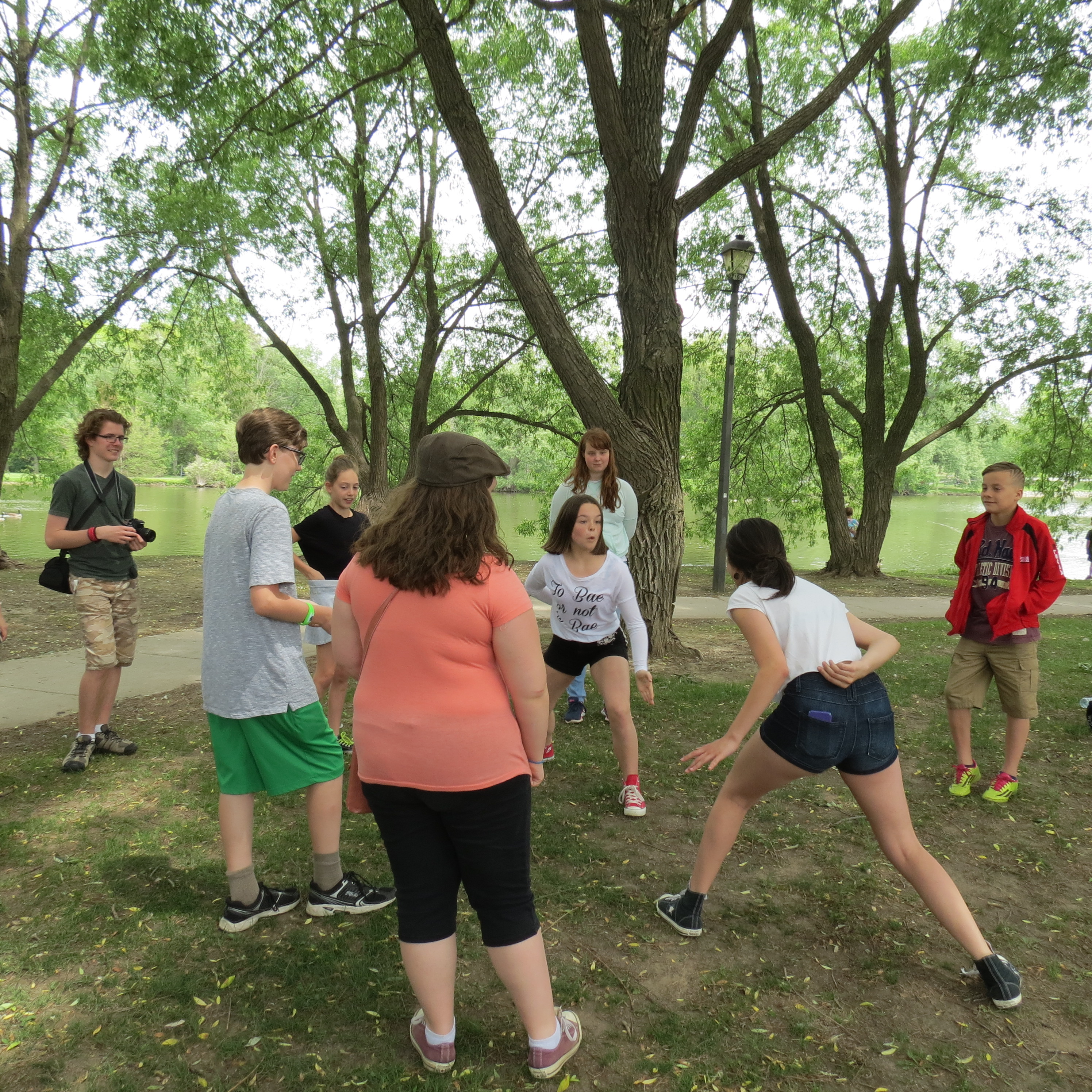 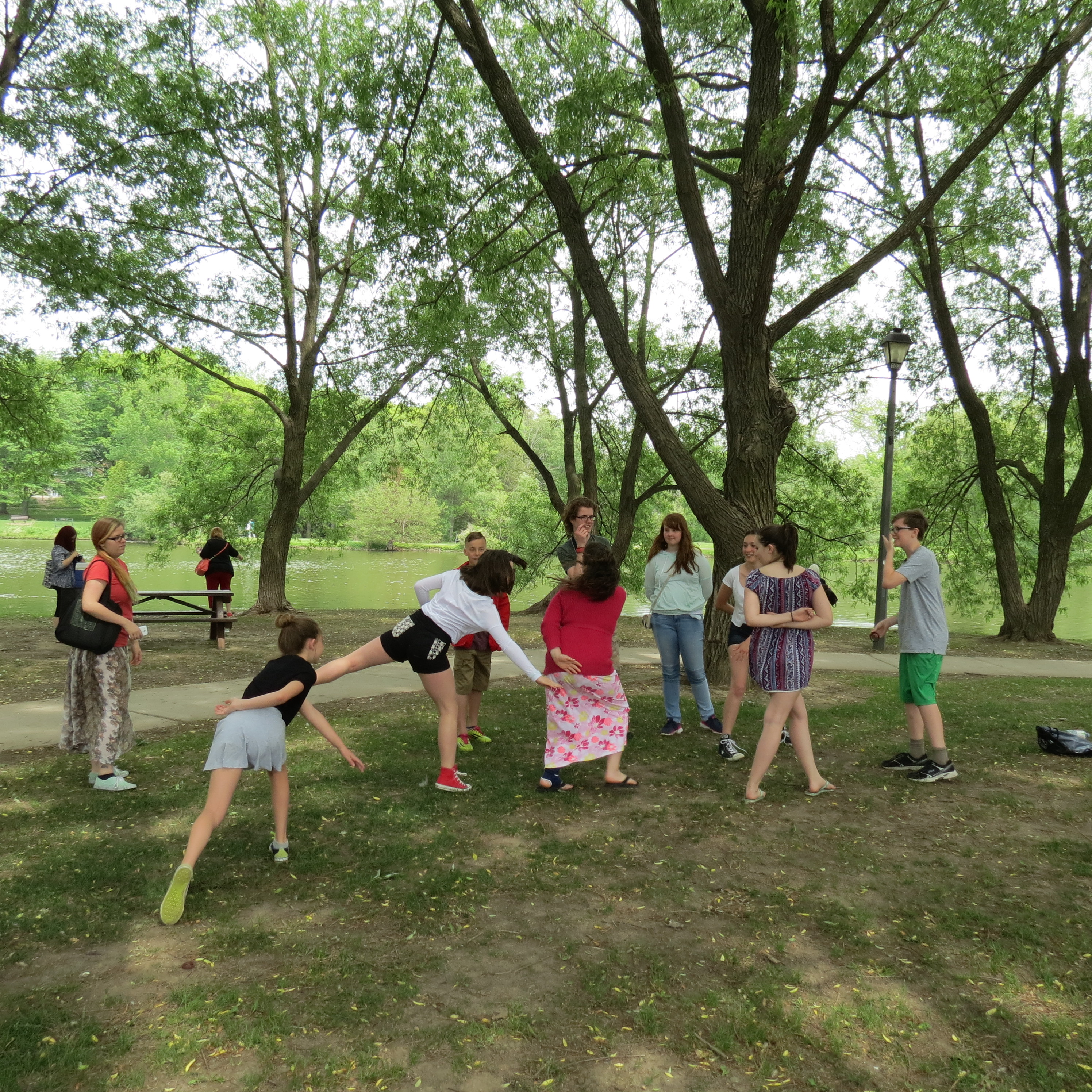 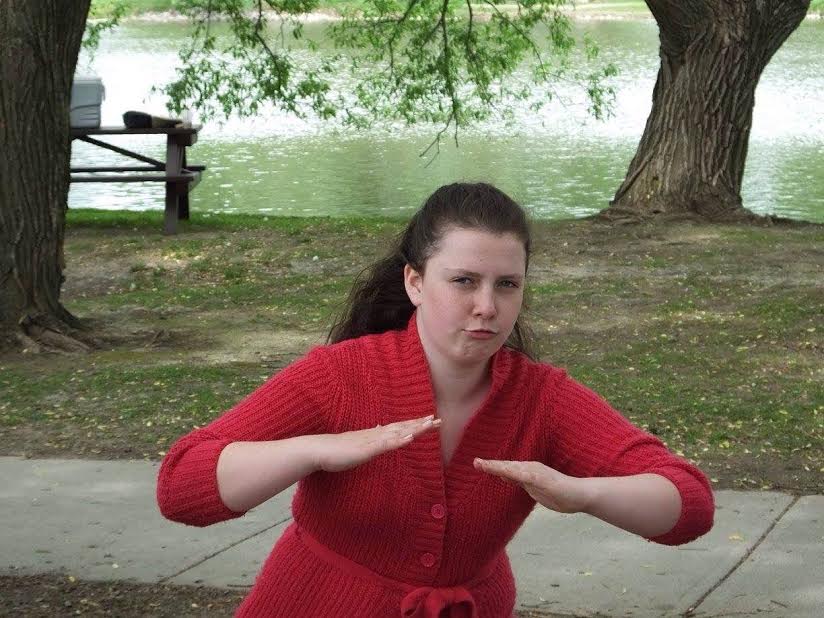 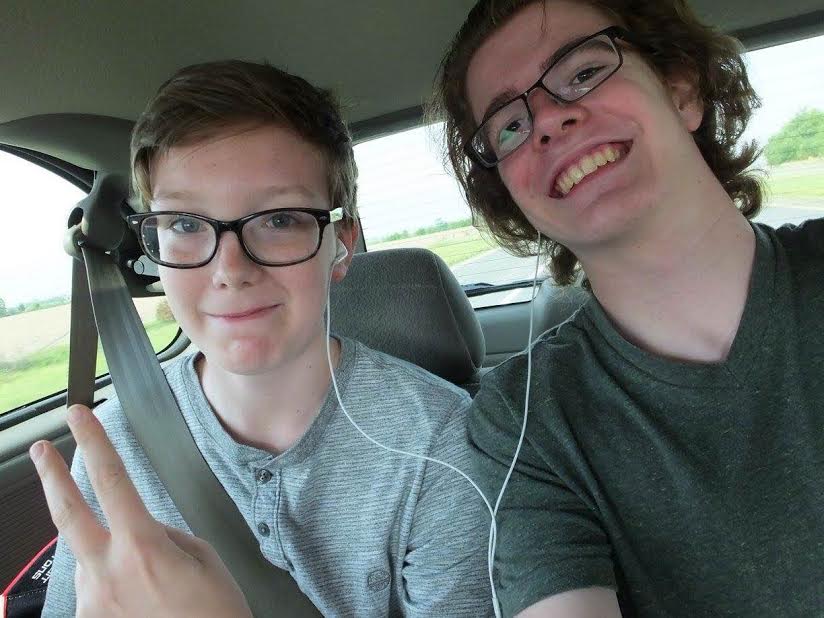 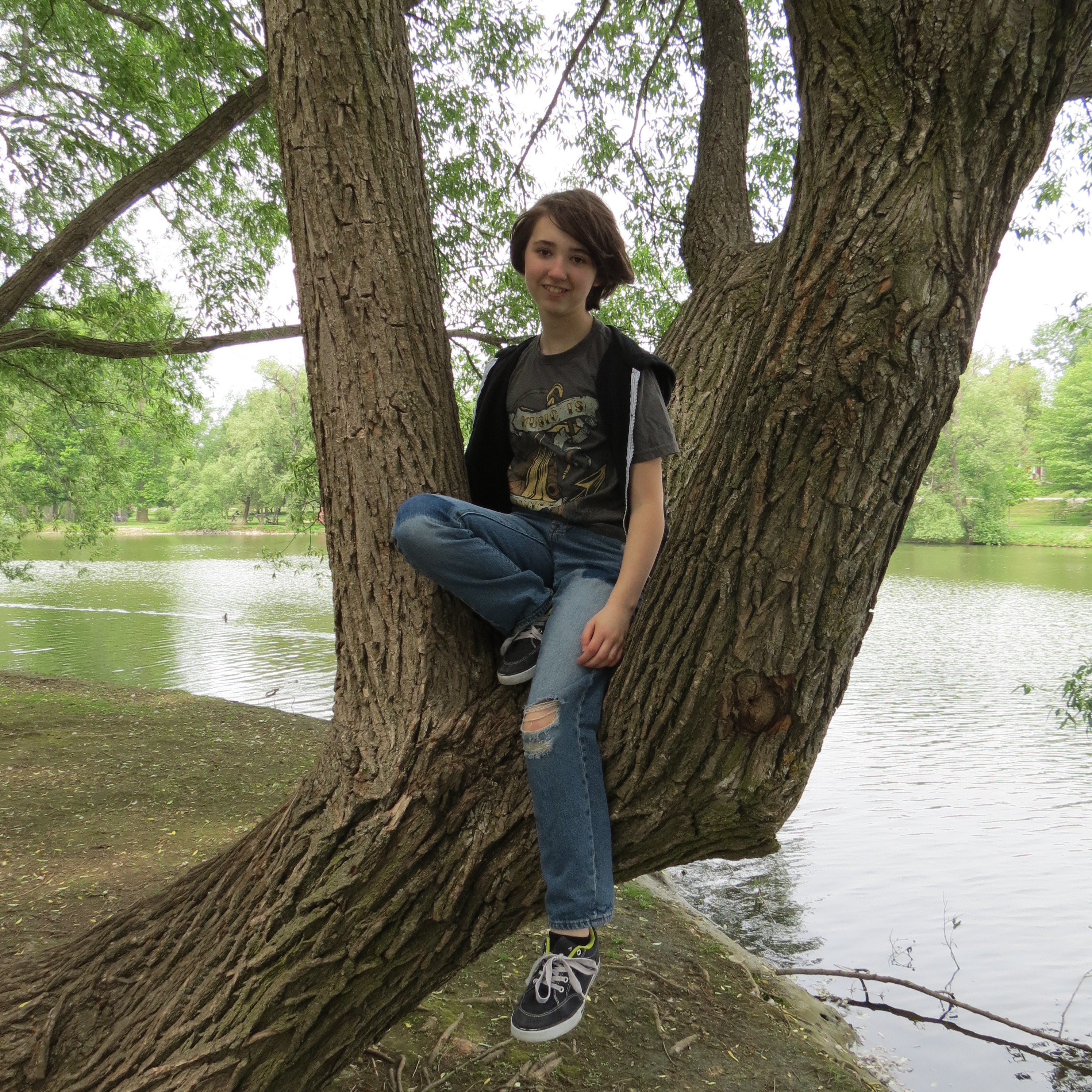 We had only a short amount of time to explore the town before meeting up again in the lobby to take our seats for the 2p.m. show.  Not everyone left the riverfront, actually.

We had a brief peek at the gardens on the way inside: 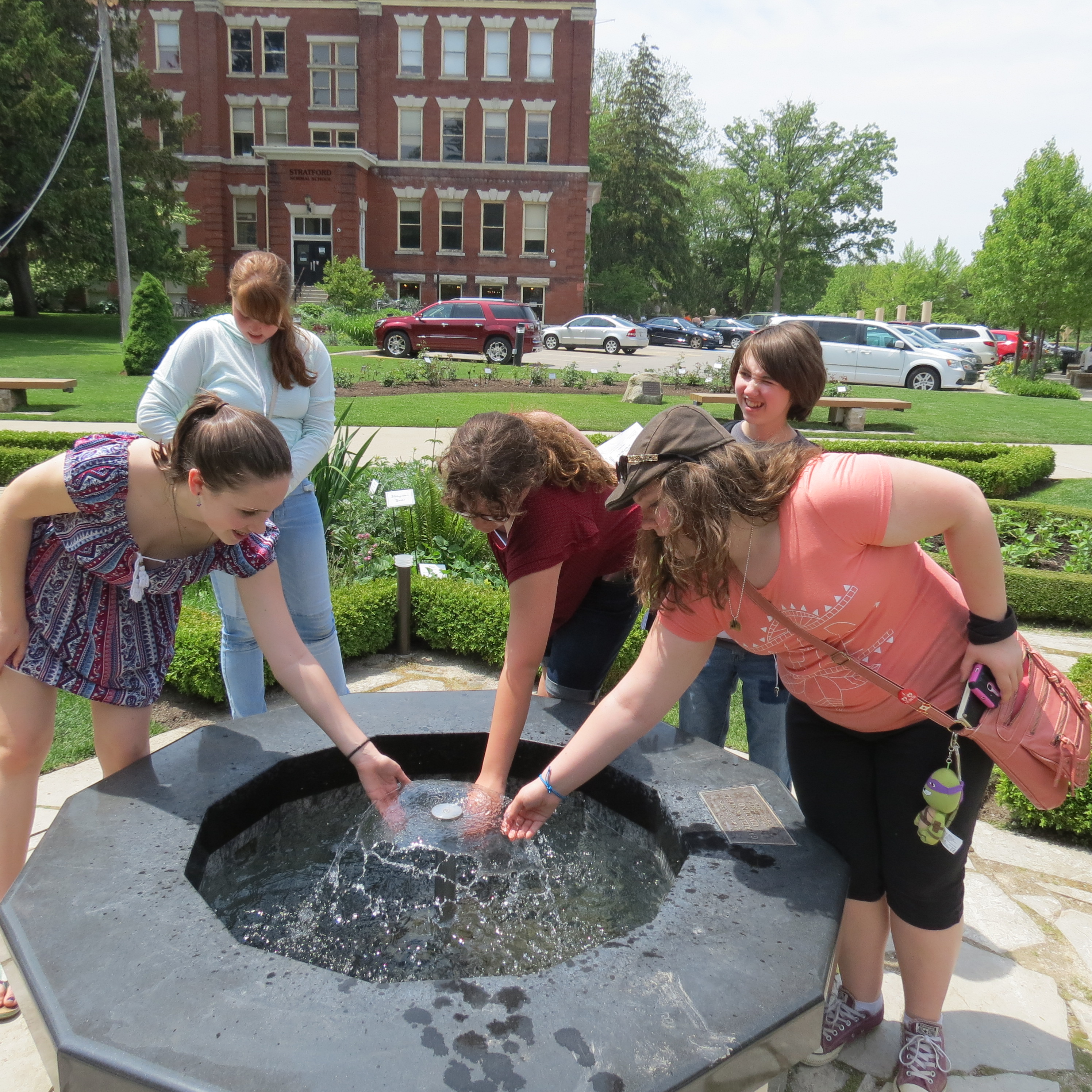 And then we were called into the building in the traditional Stratford manner.

There was a lot of excitement as we made our way into the seats!  The theatre seats over 1,800 people, and had a goodly crowd that day. We had balcony seating for a good view for even our smaller members.

(A lot more people were still due to arrive and take their seats when this was shot!)

The play was terrific.  We went into it with a fierce curiosity about how the actors and director would handle certain elements. It’s too early in the season for spoilers, but there were a few things that took us off guard, and a bit of a shock towards the end. The theatre had that wonderful combination of ripples of laughter, and drop-a-pin silences that we all love. There was some wonderfully creative use of set, and some really clever and unexpected antics on Hamlet’s part that we hadn’t expected.  Because we’d studied the play, performed parts of it, and watched another production recently, everyone came into it very intrigued to see what was going to happen with Gertrude, and wondering how the live experience would compare with what they knew of it so far. I really enjoyed hearing the assessments the kids were making at the intermission and afterwards.  I also got a kick out of one of the parents asking an eleven-year-old student, as we walked out for intermission, “Are you understanding all this?” – and hearing the student replying, “Yes, of course!  Are you?”  We were ready.

We were excited about the talkback. We liked being in the rehearsal space with two of the actors, and we liked having the chance to ask them questions and interact with them for a solid half hour. It was fun having them turn it around and ask us questions, too.  They seemed to genuinely enjoy their time with us, and I think it was a great choice for the students, because they saw someone with lots of seniority, and a younger, more junior member as well, which was inspiring!

After the talkback, we got a quick picture of the kids by the sign at the front door, and from there, there was a lot of scattering. Some of the people left pretty much right after that, and others lingered for a while.

I had hoped to get all 47 of us in the shot on the bridge, but should have tried for it earlier in the day!  These are the straggler kids from the last two cars. 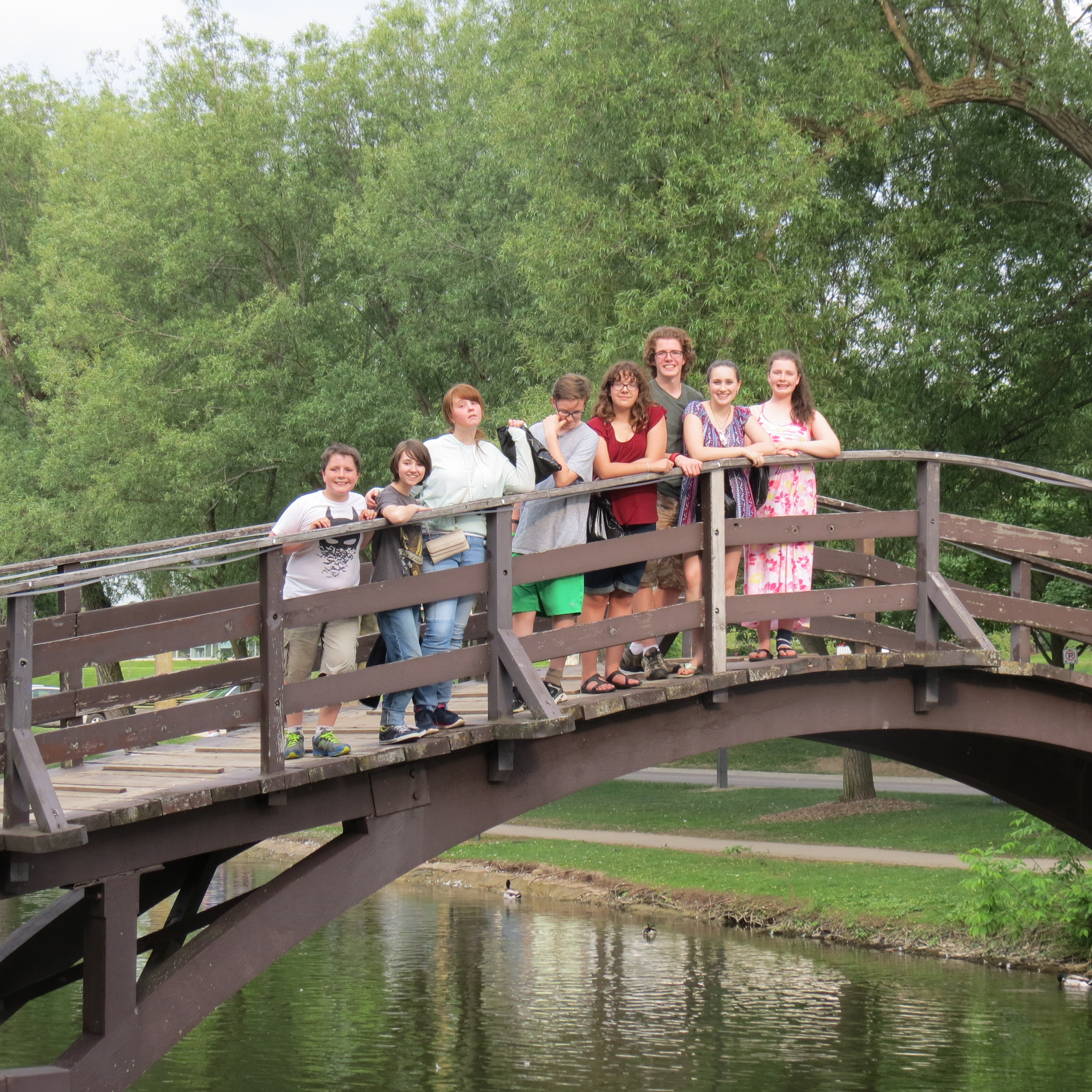 We shambled lazily into town for a leisurely dinner at Raja’s, and then bade a reluctant farewell to the lovely town of Stratford, and a wonderful first day.

If our families have anything to say about it – and of course, they do! – I believe this will eventually be known as our first ANNUAL trip to Stratford.  I am already imagining with pleasure the stir that will arise when the plays for next season are announced.  Meanwhile, I know that several families were talking about return trips this summer to see other plays, or have more time to explore the place.