Yesterday, we had to clear out of our rehearsal space for the summer, and when I unpacked everything at home, I had the fun of seeing several pieces of artwork left behind by our Juniors from their production of Fee, Fi, Fo, Fum in January!

It’s a shame that we didn’t have enough time to give the Juniors more art time for Princess Whatsername – we will definitely be pulling them back sooner after their performance next year. This year and last, they had a long, long break between their show and starting back with us for the spring musical. We’re going to bring them back with us next year in January after their Christmas show (and questions are coming at me, so I’ll just hint that YES, it might just involve a very tiny Christmas tree and a dancing beagle…)

In the meantime, in a bit of a flashback before we move on to Princess Whatsername this week, please enjoy our Juniors from Fee, Fi, Fo, Fum, and some of their artwork. 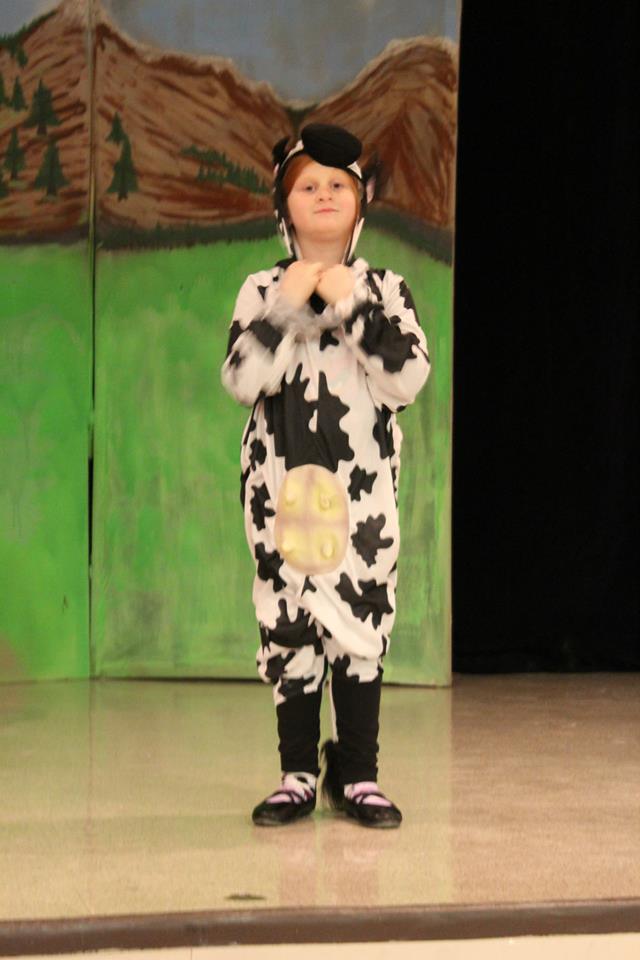 And now…the artwork! You’ll notice a certain obsession with the Cow – she was a very, very popular character, our Miss Priss!

Not to mention our beloved Chicken who laid the golden eggs!

A spectacular rainbow-patterned cow is happening here – not sure what was up with that, or who the nifty bird is, but it’s fun!

And then, there was the plot review. Honest, we DID finally make them understand that being evicted is BAD news, despite the sunny smiles and evident excitement in the drawing!

A lot of excitement surrounded the intimidation factor of the giant’s character!

The celebration of “Market Day,” which was definitely one of the favourite songs in the play! 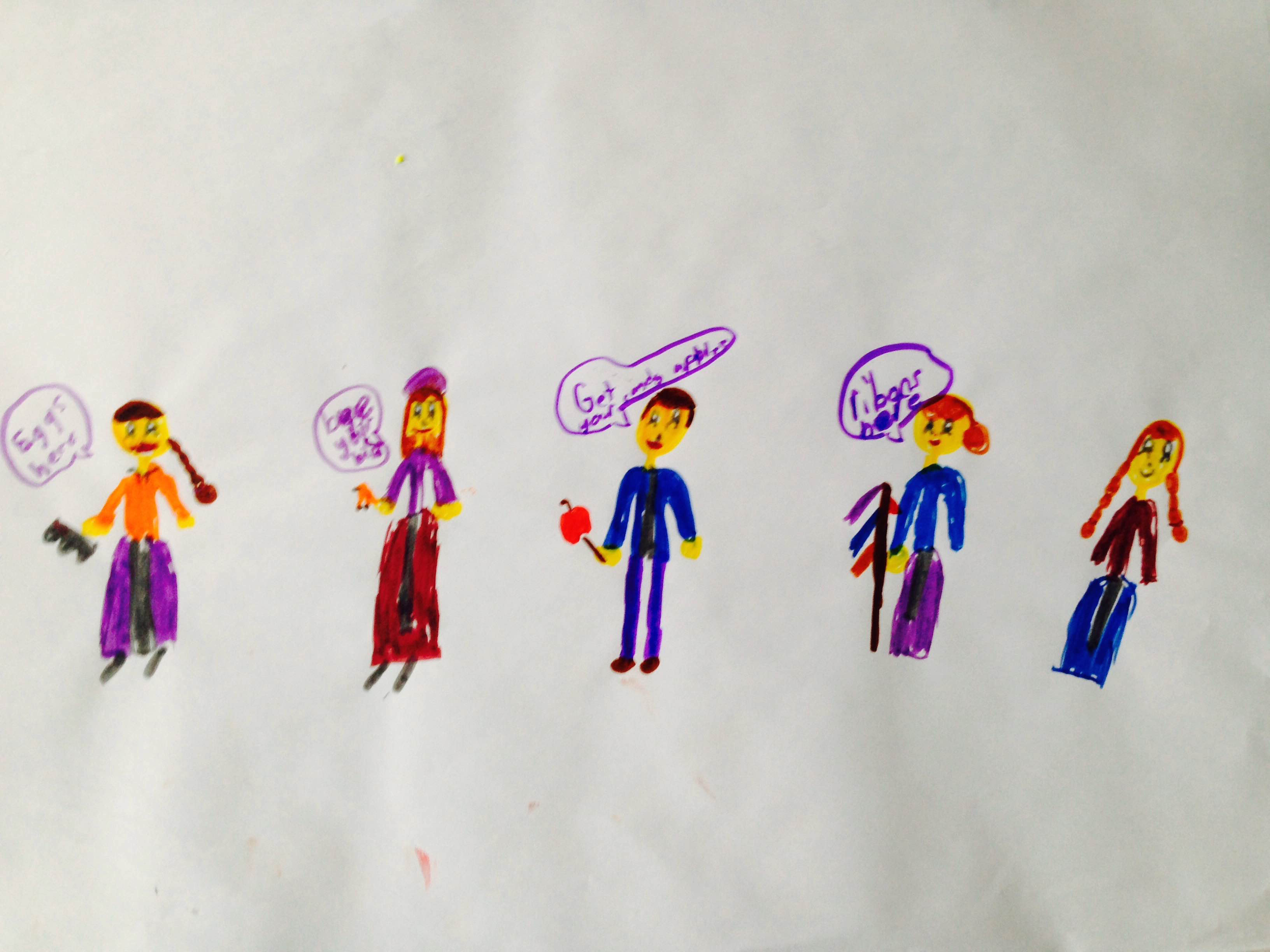 And two people who just had to sum up everything going on in one big mural! As you can see, it was a busy play with a lot of activity! 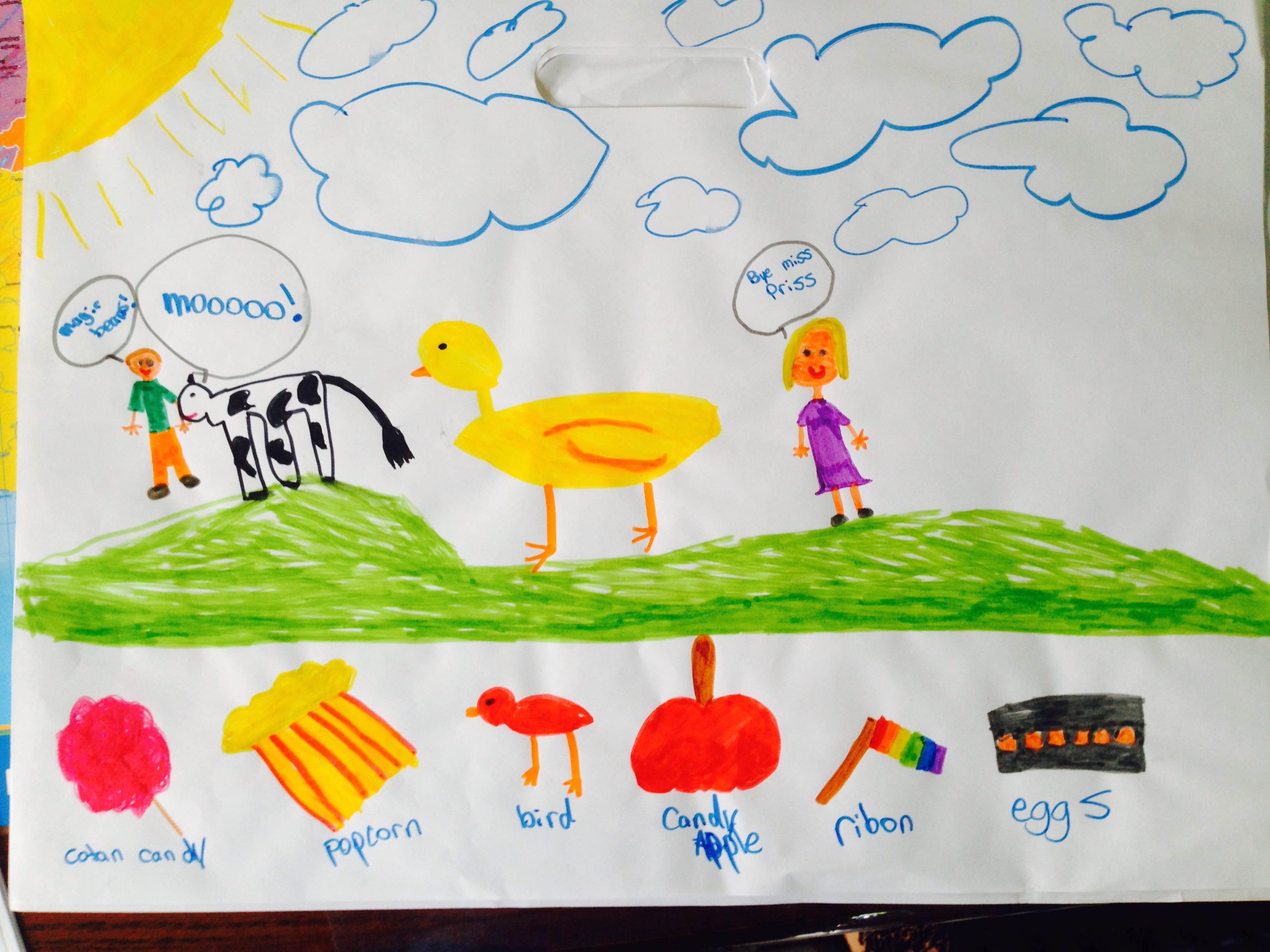 Our Juniors are full of life, full of energy and mischief, and they’re just really so adorable when we get them on stage. We admit, life can be busy with them on our Saturday afternoons, but we wouldn’t trade them for anything! They have their own special jobs in our upcoming show, Princess Whatsername – a bit of “extra” attractions being built into the production!

One of the things we love about our programme is the Adopt-A-Junior plan. Once they’re finished with their own play, and are incorporated into rehearsal time with the Seniors, every Junior is assigned at least one, but usually two, Senior “Parents,” who are responsible for looking after them and including them during rehearsal time. We really value the way that the students partner together to work to create the sense of family. The Juniors are far less intimidated, and the Seniors are kept mindful even more than they might otherwise be, of how important their own behaviour is to model to their small protegés. It also makes for a more smooth transition every season when Juniors move up into the older group, and are already more comfortable.

Next season, we will accept Juniors between the ages of 6-10. Because they do require a lot of time and attention, we will have to cap our numbers around 16-17 kids – so we already know that we won’t have a lot of openings, as many of our kids from this season will be returning. Please let us know early if you’d like to be added to our waiting list (see the “how to join” link for more information).