This is production week for our Pride and Prejudice. As I write, we have gone through two of our four shows, and our five months of hard work are coming to fruition in some beautiful performances.
The play runs a full three hours (though we did make cuts to the school show, it still went two and a half!). The students have been stretched in so many ways, not the least of which is the sheer volume of lines they had to learn. Elizabeth Bennet has by far the most lines, at approximately 410. Darcy is has over 150, but plenty of his are pretty lengthy.
The costumes – we have over two dozen kids in this cast, and several of them have more than one costume. Our costume team, led by Denise Duckett, has worked like slaves to make this look as beautiful as it does on stage – and it does look very, very beautiful. I can’t even imagine trying to function as a theatre company without the tireless effort of our dedicated costuming volunteers. I couldn’t possibly be more grateful to them.
Our crew – volunteers drawn from St. Clair College (The Entertainment Technology and Musical Theatre programmes) and the University of Windsor, as well as a few high schoolers – my goodness, they have gone above and beyond this week. Because of a concert booked mid-week at the theatre, we moved in and out and back in again during our tech week – and these wonderful people were slogging things back and forth across the street, not to mention putting the thrust back up so the kids could have more room on the stage. They’ve been there early, they’ve stayed late, they have worked like slaves. They’ve been at my house painting sets, they’ve been to rehearsals, they’ve run around getting quotes for me, they’ve showed endless patience and generosity with us. I can’t say it enough. We run on volunteer label, and I love them all for everything they do.
We have had lovely media attention to help draw audiences. The Windsor Star article, ongoing promotion with AM800, SnapD Windsor coming out, the Windsor Lance, and of course, people spreading the word everywhere with us on Facebook, Twitter, Instagram and more. Theatre relies on word of mouth. Thank you, to everyone who has been helping to spread the news.
I really want the word to be spread, because with Pride and Prejudice, our students and volunteers have tackled what I believe has been by far the most challenging of any play we’ve ever performed at Riverfront. I thought that The Importance of Being Earnest was a tough one, and it was. But it was also half the cast, and performed exclusively by high-schoolers. We have students as young as eleven on the stage for this one – and they’re NAILING it.
The growth I am seeing in these young people is astonishing. They are taking responsibility for so much – for ensuring that their props and costume pieces are where they need to be, when they need them. They’re developing systems to organise those things more effectively. They are backing each other up and covering for slips really, really well. Their teamwork has never been stronger.
We’re definitely telling the story of Elizabeth Bennet and Fitzwilliam Darcy. We’re telling the story of Jane, and Bingley, and Mr. Wickham and Lydia, and Mr. Collins – we’re bringing Jane Austen to life on that stage for three hours every show, and it’s beautiful. But for me, always, the real story is everything that happens behind the scenes and between the people involved, and I want to share that, as well.   This one is fairly extraordinary, in so many ways. Come see it!
PHOTOS BELOW – It’s too hard to restrain ourselves, so there are plenty here!

The school show audiences were the most courteous, attentive young people we have ever had the pleasure of entertaining. Huge kudos to the grade seven/eight students of Amherstburg Public, King Edward, Begley and Giles Campus schools! 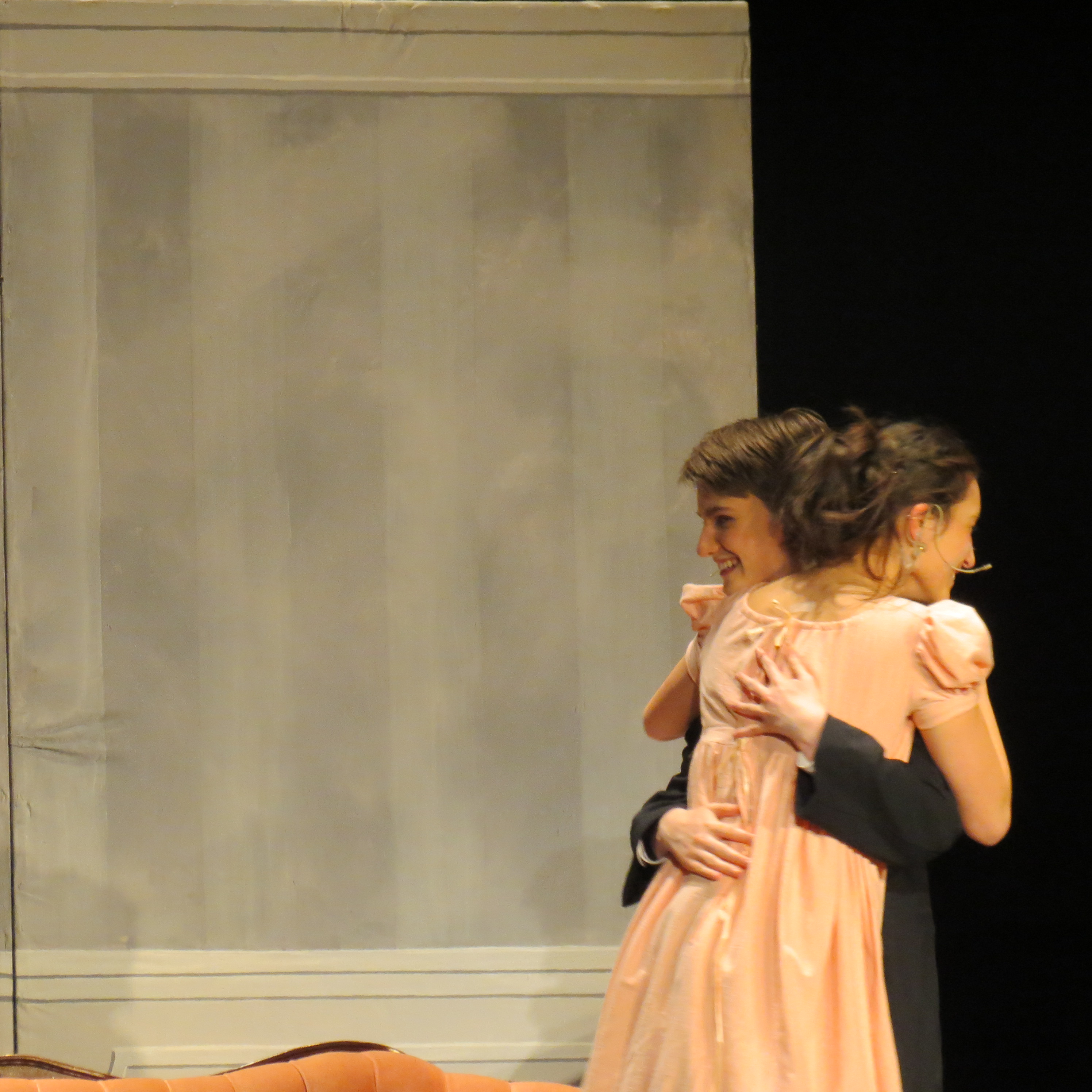