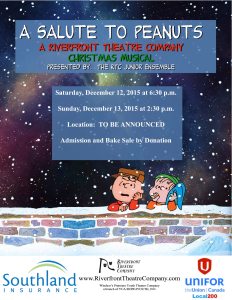 This weekend, on Saturday, September 19th, our Junior Ensemble for our 2015-2016 season, will join us at our rehearsal space for their first day! They’ll be rehearsing from 1 p.m. to 4 p.m. every Saturday.  In December, they’ll be performing their own production of A Salute to Peanuts, with much-beloved Christmas carols, and classic characters, for their friends and families (location still to be determined). After the new year, they will join our Senior Ensemble in their preparations for Aladdin and the Arabian Nights.

To get an idea of what the involvement of the Juniors entails – have a peek at a small but entertaining video prepared for us a few years ago, in our former rehearsal space. You will see that we have a program whereby our Juniors are “adopted” by Seniors who watch over them, help them to be included and involved, and generally promote that sense of family.  We do have age-divisions in Riverfront – but we work well beyond them to be a team together, despite the age differences in the group. When you’re talking about a company of kids from ages 6-18, it’s a big deal to keep that teamwork going.