This Saturday morning was just a little bit different for RTC, and a LOT noisy – we had a jam session!  Our upcoming production of Princesses Aplenty this coming spring is a full musical, and we will be having live performers. We were wondering who in the cast we might be able to incorporate, and so we wanted to have a peek at our skill base, and of course, with Jeff as our Music Director, to have some fun with it, as well.
Jeff sent his little letter out to our company on Friday to encourage anyone who might be holding back:
For many years, I was the program director of one of the more successful music camps in Northern Ontario. Algoma Music Camp was a 2 week residential summer camp experience. We taught all different types of kids, playing all different types of instruments, at every possible skill level (from 8 years old and playing violin for three months so far….to concert-ready masters of their instruments) for many years. For the kids who came, year after year, something developed over the years: a real joy in simply playing and making music together…in other words: Jamming with each other for fun. And they would help each other, encourage each other, celebrate their victories and clap and cheer wildly at the first ever recital-in-front-of-people moment. (sound familiar?)
This is where I’m coming from.
On Saturday, I want to hear people play their instruments. Not just the known strong players, but anyone, at any level. What we learn here could translate into the coolest combination of youth players the stage has ever known! Recorders/Clarinets/Flutes/Oboes/Bassoons/Violins/Violas/Cellos/Basses/Guitars/Mandolins/Trumpets/Trombones/French Horns/Baritones/Tubas/Drums of any and all kinds/Piano/ ….Spoons/Rankets/Sackbutts/Bagpipes/Zithers/Harps/Harmonicas……. (Ok, this list could go on for ages <grin> )
RTC is very much like AMC for me. It’s the same kind of connection, the same kind of passion, the same species of kid (generally). The same sense of FAMILY! It’s why I felt like I came home when I got here.
Long, rambly…bringing up many words and lots of passionate emotions….yeah, this looks like a post from Jeff, alright.
Bottom line: Bring an instrument with you, if you play. We would love to hear you.
Jeff. 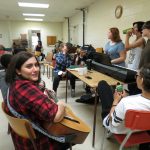 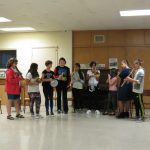 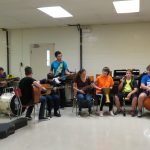 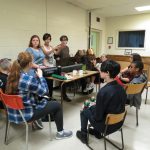 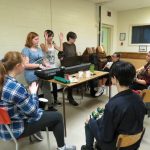 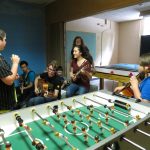 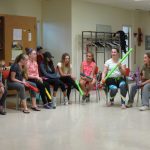 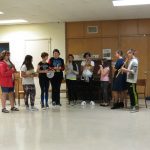 One of the instruments pulled into play was our newest donation, a beautiful flute from Red Raven Flutes. This beauty will be played on stage during Narnia: The Early Chronicles and raffled off at the end of the production.  Isn’t it gorgeous?

The tragic part about the morning rehearsal/jam session was that the Juniors couldn’t participate.  All work and no play for these dedicated young artists. They wanted to get through their read-through of the script and on to casting!  So they nobly pushed on and worked hard, and by the end of the morning, I’m proud to say we’d read the entire play with them, and they have been sorted into their parts.
The Best Christmas Pageant Ever Cast
Bob Bradley: Lex
Grace Bradley: Emma
Beth Bradley: Sierra
Charlie Bradley: Ryan
Ralph Herdman: Noah
Imogene Herdman: Alisa
Leroy Herdman: Elijah L.
Claude Herdman: Arya
Ollie Herdman: Isaac
Gladys Herdman: Charlotte
Alice Wendleken: Bella
Mrs. Armstrong: Melanie
Mrs. Slocum: Samantha
Mrs. Clark/Juanita: Priya
Mrs. Clausing/Shirley: Mary
Mrs. McCarthy: Ella
Maxine: Marissa
Elmer Hopkins: Kenzy
Hobie: Roan
David: Rachel
Reverend Hopkins: Erin
Firefighters and Beverly:  Miscellaneous Seniors! (we’re saving the best parts for the Juniors.)

A well-deserved lunch break came next, before we buckled down to the serious work of the afternoon: Consensus Casting for Narnia.
What is consensus casting?  Just what it says – casting through agreement. Not through a popular vote – Riverfront isn’t meant to be a popularity contest. Instead, we have the students choose the top three roles that they’re interested in, and then the involved parties have a discussion about who should have the part, until they come to an agreement; until everyone else steps down, and it’s resolved. In only two cases did it come to a deadlock where the directors decided. And at every point, our 38 participants were polite, kind, generous, respectful and mature about it. They selected the cast for this show together. It was agonising a few times – and some incredibly beautiful character traits were revealed during and after this event. They had done a lot of the casting together tentatively, I think. But there are always some surprises, and there’s always some difficult decisions. Most of the kids said that they really understood how hard it is for the directors to make the selections – and most of them said it’s too hard to watch their friends working it through to come to a decision. No one APART from those seeking the parts has a say. It’s pretty interesting.

Ryan and Matt talking through the casting of the role of Aslan. After discussion, Ryan surrendered this role to Matt. Ryan was subsequently cast as the beloved Mr. Tumnus.

Halfway through the casting process, we moved out to Curry Park to keep things quiet in the church for a large funeral. That helped, I think, settle some nerves, and we turned them loose after the casting to let off some steam.

Ryan, Caroline and Katie making a bid together for the role of Uncle Andrew, which went to Katie. Caroline was subsequently cast as Jadis, The White Witch. Ryan, as previously mentioned, became our Mr. Tumnus.

Continuing on with our dizzying pace – next week – auditions for Princesses Aplenty. And then with everything settled – we’ll be well on our way to a full season of incredibly hard work!!